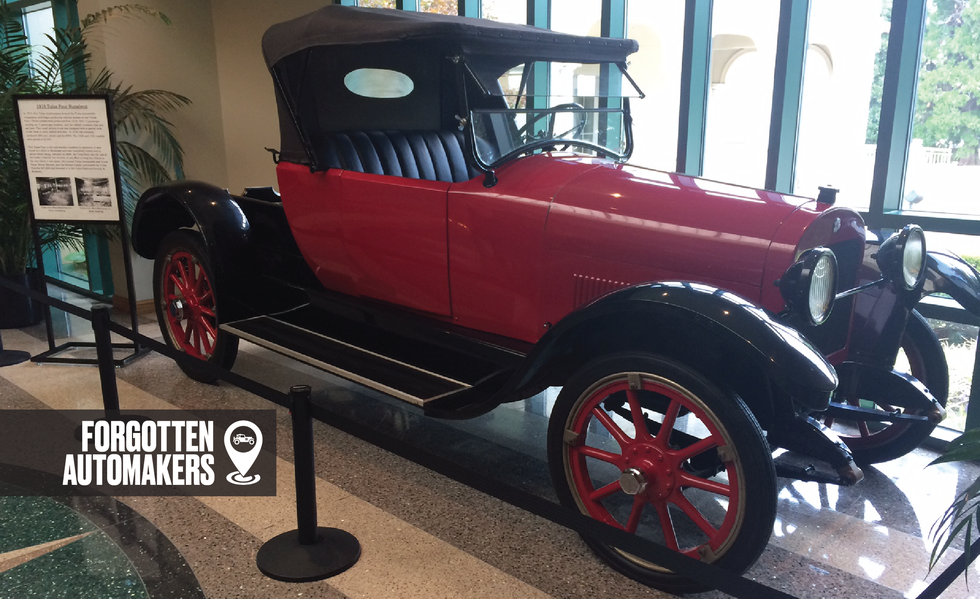 The Tulsa Automobile Corporation was officially founded in 1917, with its first cars unveiled in a bizarre ceremony in the lobby of the grand brick Hotel Tulsa downtown. Potential customers, investors, and other interested parties were invited to the festivities, where, according to reports in the local Tulsa Daily World, the vehicles would be christened “by a young woman, Miss Tulsa, with a bottle of Tulsa-made gasoline.” What a beautiful bouquet that must have emitted. We hope that cigar smoking was discouraged.

Like many automobile manufacturers of the time, Tulsa was more of an assembler than an originator. Cars were put together mainly from off-the-shelf parts—the four-cylinder engines came from Lycoming or Herschell-Spillman, the clutch from Borg & Beck, the gearbox from Muncie. But the cars were given some special design or engineering elements to separate them from their peers.

Tulsa’s magic bean wasn’t its engineering, though, but a somewhat jingoistic reliance on local pride and the kind of anti-“Eastern Establishment” positioning that’s still found in the region. A 1918 ad in the nearby Muskogee Times-Democrat reminded readers that the “Tulsa Four is manufactured in the West, it is a home product. Like the Eastern factories will care for the Eastern people, the Tulsa Four will care for us Western folks.” Driving the wedge even further, the ad asked, “Are you going to buy a car that you will have to tie up for indefinite periods, while you send to some disinterested Eastern factory for some little part?”

The article above was taken from the below link

RE: The Tulsa Automobile Corporation

Most frequent questions and answers

Where is my VIN number?

It’s super easy to locate your VIN number, it’s found on your car, your insurance card and your title.

There are many places where you can locate it:

Every car has one, and each one is unique!

I haven’t received a call or email with my offer. What gives?

Check your spam folder! Also feel free to give us a call at ###, and we’ll get you taken care of.

Does the car have to run?

No, we will buy a car that doesn’t run.

Will I be charged for towing?

How quickly will you pick up my car?

It depends on how busy we are, but we could pick up as soon as 1 day!

Do you service my area?

We service a thirty mile radius from Tulsa. This includes the following cities and towns:

Can my offer change upon pickup or after I have accepted my offer?

No, we stay true to our word. If we find any big difference in appearance when we arrive we will make you an updated offer

Can the price be negotiated?

No, we do not haggle or negotiate for cars.

When will I get paid?

Immediately! We’ll come with cash in hand for your junk car.

Where do I upload pictures?